In October 2019, Utah Schools for the Deaf and the Blind announced a new Deaf School in Springville, Utah.  This program will be known as the Elizabeth DeLong School of the Deaf, named in honor of Elizabeth DeLong.

Elizabeth DeLong, known as “Libbie,” was born hearing on April 2, 1877, in Panguitch, Utah, to Albert DeLong and Elizabeth Houston. At the age of five, Libbie became Deaf from scarlet fever and smallpox. At home, her mother was busy rearing her large family and wasn’t able to pay much attention to Libbie, but she was very close to her older sister, Dicey. She taught Libbie to practice her speech and served as an “oral” interpreter until she left to go to the Utah School for the Deaf (USD) in 1891.[1] 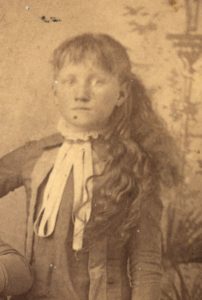 Elizabeth DeLong as a young girl. Courtesy of the DeLong Family Saga.

At the age of fourteen, Libbie’s life changed when she entered the USD which was housed at the University of Deseret in Salt Lake City, Utah. There, she began to learn sign language. At school, she was an active participant in extracurricular activities and became one of the editors of the student newspaper, The Eaglet.[2]

On June 8, 1897, Libbie graduated from high school and began attending Gallaudet College in Washington, D.C. in the fall of 1897.[3] During her senior year, Libbie was elected associate editor of the college publication called The Buff and Blue.[4]

In 1902, Libbie was the first Deaf female Utah college graduate with a bachelor’s degree and the first in her family to have a full college education. She left Washington, D.C. and returned to Ogden, Utah where she began to teach at the USD on September 3, 1902. She continued that position for fifteen years. [5] She is believed to be the first Deaf teacher with a degree to teach at that school.

Libbie died of cancer on September 25, 1931, at the age of 57. Her associates remembered her as a bright and attractive personality. Her nieces and nephews described “Aunt Lib” as the bright, talented woman she was. They also shared, “With a quick wit and a sense of humor, she never let her deafness keep her from enjoying life and making a success of her life. Her devotion to her nieces and nephews was legendary.”[9] Libbie was the first in many of her accomplishments and she has inspired people both in her time and today. Utah is fortunate to have her as an inspirational leader on behalf of the Utah Deaf community.

Learn more about this remarkable woman. (Thank you to Jodi Kinner for all the information and content about Elizabeth DeLong!)

The school opened on January 6, 2020.   This school offers direct communication with teachers and peers in spoken language and American Sign Language, depending upon the needs of the students which is determined by their Individualized Education Plan (IEP)Team.

Deanna Glasser serves as the educational director of the new school.   Contact her at deannag@usdb.org

News Article: Springville getting school for the deaf and the blind

On nice days, large, glass garage-like doors can open on the sides of the cafeteria area for the Springville campus of the Schools for the Deaf and Blind, bringing in a literal breath of fresh air to the school.

“I can’t wait to see this space when the trees are in bloom and these doors are open and the inside and outside are the same experience,” Joel Coleman, the superintendent for the Utah Schools for the Deaf and Blind, said as he stood in the space Thursday in a hardhat and long coat.

That day is coming soon. Construction started on the $13 million school in March and is expected to be complete in January. Its students have been housed in portables across Utah County in the meantime.

The school, designed by Jacoby Architects, includes architectural features to help students who have hearing or vision loss navigate the facility. Those include wide, open spaces so students can sign to each other, contrasting colors to help the vision impaired locate parts of the school and floor materials that change so that students who use canes know where they are.

“They were able to design in all the things that make a difference for the kids,” Coleman said.

When complete, the school will have 14 classrooms that will each hold from four to 13 students. The building will start out as an elementary school and will eventually house some middle school students.

The Springville school is expected to see students from Nephi up to Orem. As more children are born in Utah County, Coleman said the state expects to see the number of children with disabilities increase, as well.

While other states have students with vision impairments or hearing loss in mainstream classrooms, Coleman said Utah allows families to choose between a traditional school or one of the Utah Schools for the Deaf and Blind. Coleman said the specialized schools give students the tools they need to be self-reliant.

“We want them, like any other child, to make a difference in the world,” he said.

The Springville location is located just south of the Clyde Recreation Center and will join campuses in Ogden, Orem, and Salt Lake City.